To understand this new concept of graduated roll technology in driver face design, we must first look at what has been standard in heads over the years. There are two different radii incorporated on the face of all golf drivers heads- a horizontal curvature called BULGE, and a vertical curvature termed ROLL.

While there is definite scientific proof of the value of BULGE, no such reason has ever been explained for the presence of ROLL. Yet all wood heads have been made with vertical ROLL radius since the beginning of the 20th century, until Tom Wishon, in the middle 1990’s started incorporating his graduated roll technology into his driver heads. 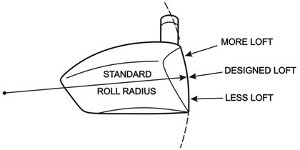 When the face on to-day’s drivers carry a vertical curvature, the loft angle at the top of the face is greater than the designed loft of the head, and less at the bottom of the face.

As driver heads have steadily increased in size from the mid 1990s, face height has also increased greatly. Yet the vertical roll radius for all other golf equipment companies has not changed during this time.

These dramatic loft changes can have the effect of causing the launch angle for shots hit above or below the center of the face to be very inconsistent-too high for high face impacts, and much too low for low impacts. 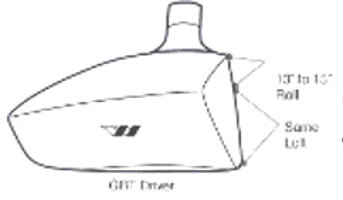 From all of his observations, he developed the concept to change the vertical roll design of a typical large size (460 cc +) driver head. Initially he designed a driver prototype with a flat face from the bottom of the face up to a point about 2/3’s of the face height-from there up to the topline, he incorporated a 15” roll radius- some roll, but less than what the typical driver face radius was at the time for all other companies. Thus, graduated roll technology was born.

From hit testing using both human golfers and robot hitting, he found that the GRT face provided some very interesting and very positive shot results for the vast majority of golfers and swing differences. High face hits flew perfectly well for the full variety of swing types and all head speeds.

For swing speeds up to 115 mph low face hits resulted in better flight and better overall distance than did the same low face hit on a driver made with the typical 9-12” roll. For swing speeds over 115 mph it was observed that the launch angle and spin from the 0 roll bottom of the face could get too high and cause a slight beginning of a ballooning flight shape that would rob total distance. He therefore slightly modified the previous flat lower face into a slight 20” roll radius.

The entire goal of Tom Wishon’s graduated roll technology in the face design of driver heads is to eliminate the inconsistency of how the vertical roll radius will change the loft angle up and down the face.

Loft is HUGLEY important for consistent distance-every golfer has to understand that basic technical point about club head design. If you encounter any golfer that doubts this new departure from over 100 years of vertical face radius design is worthwhile, simply pose this comment and question and wait for the response……”since you know that LOFT is THE NUMBER ONE thing that controls launch angle and distance, and since loft on a driver head is only measured in the very center of the face, on all driver heads with conventional roll up and down the face, are you good enough to be able to hit the ball time after time in an area of the face the size of a thumbtack?”