Coefficient of restitution is a measurement of the energy loss or retention when two objects collide. The coefficient of restitution measurement is always expressed as a number between 0.000 (meaning all energy is lost in the collision) and 1.000 (which means a perfect, elastic collision in which all energy is transferred from one object to the other).

It is impossible for the collision of your driver head and your golf ball to produce a perfectly elastic collision (COR of 1.000) in which all energy is transferred, for two reasons:

1.The clubface and the ball are made from completely different materials.

2. The clubhead and the ball are of two totally different weights, or masses.

It has been found that the COR of the collision between lets say a stainless steel driver head, which does not have any Spring Like Effect (SLE) and a standard ball is about 0.78.

The current USGA rule limiting the coefficient of restitution of a clubhead states that the COR cannot be higher than a measurement of 0.830. This means that when the clubhead impacts the ball, there cannot be more than an 83-percent transfer of the energy of the head to the ball.

To relate this to your golf game-Comparing when you were playing those stainless steel drivers back some years ago and now the new titanium spring-faced drivers, you have gained 21 yards of distance- assuming a driver swing speed of 100 m.p.h. For every increase in C.O.R you gain 4.2 yards. 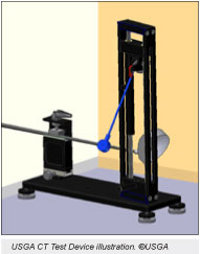 The method of measuring the SPRING LIKE EFFECT in a clubface, recently developed by the USGA is to use a pendulum on the end of which is a metal hemisphere which bounces against the clubface and the contact time relates directly to the SLE. The results of the conformance tests are used in determining conformity of the club head to the Rules of Golf,

This test measures the response of a shafted golf club. If there is no shaft in the clubhead, one must be temporarily installed prior to testing.

The normal procedure calls for the measurement to be made at the face center, and is meant to replace the old coefficient of restitution method.

Back to Driver Head