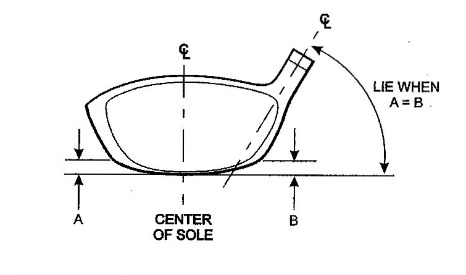 Through Hand Select and Bending Service, these driver heads can be ordered in

any loft from 8* to 16* in half degree increments

any face angle from 4* open to 4* closed from each model's face angle design spec.

No driver in the world can offer such a wide range of all three key specifications on the same head, all together.

Go to Our WISHON Drivers

Most golf companies publish their lie angles, for each model of driver head, on the internet, but a simple protractor out of your tool box will do. Place your driver so that the sole is flat on the floor, rest the club against the wall, and measure the lie angle. Most drivers are between 56 and 60 degrees, and obviously the pros get theirs custom built to their specs. As a little humor here-try asking that commissioned salesmen at your big box golf store, what the lie angle is on that special driver he is trying to sell you. Watch his facial expression as he panics.

Not that long ago a standard driver lie angle was 50 degrees. In the last few years...manufacturers have raised the lie angle standards on their drivers. Tour players generally use flatter than the standard clubs that come to market, but not by much.

Driver lie angle is not a huge factor to worry about in fitting because:

1. Modern titanium heads cannot be bent to alter the lie angle without special equipment and heat damaging the head. As above, Wishon drivers can be bent to specific lies.

2. Shot misdirection from the lie of your head being tilted at impact is directly proportionate to the loft. Drivers have the least amount of loft of all club heads, so that the amount of misdirection is small.

3. Lie is only important to tall or short golfers because the lies on the drivers available are really tailored to male golfers of 5’11” to 6’. Obviously if you can’t get or afford to get, a driver lie custom made for you, or can’t get it bent, cut your driver down in length, to achieve a more perfect contact. 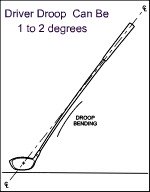 Since the lie angle of a golf club at rest is somewhat different than at impact, it is important to make a dynamic measurement of this parameter as the club contacts the ball during the swing. Centrifugal force of the moving club head will flatten the normal lie angle at the point of impact. Up to 2 degrees of change can occur by the downward bowing of the shaft. For this reason, a dynamic measurement at impact is the only accurate way to gather lie angle data.

Driver Lie angle is not much of a fitting factor in your driver because the lower loft of drivers combined with the greater droop of the shaft does not result in a marked misdirection tendency of the shot.

Unless the golfer’s physical size and address position are such that the normal range of lie angles and toe to heel sole radii offered on driver heads make the golfer so uncomfortable that they begin to change their set-up position and swing to a point that cause more swing errors, the common range of lie angles designed on the majority of drivers today will suffice.

GO FROM DRIVER LIE ANGLE BACK TO DRIVER 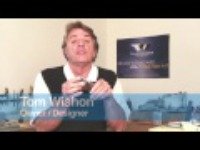